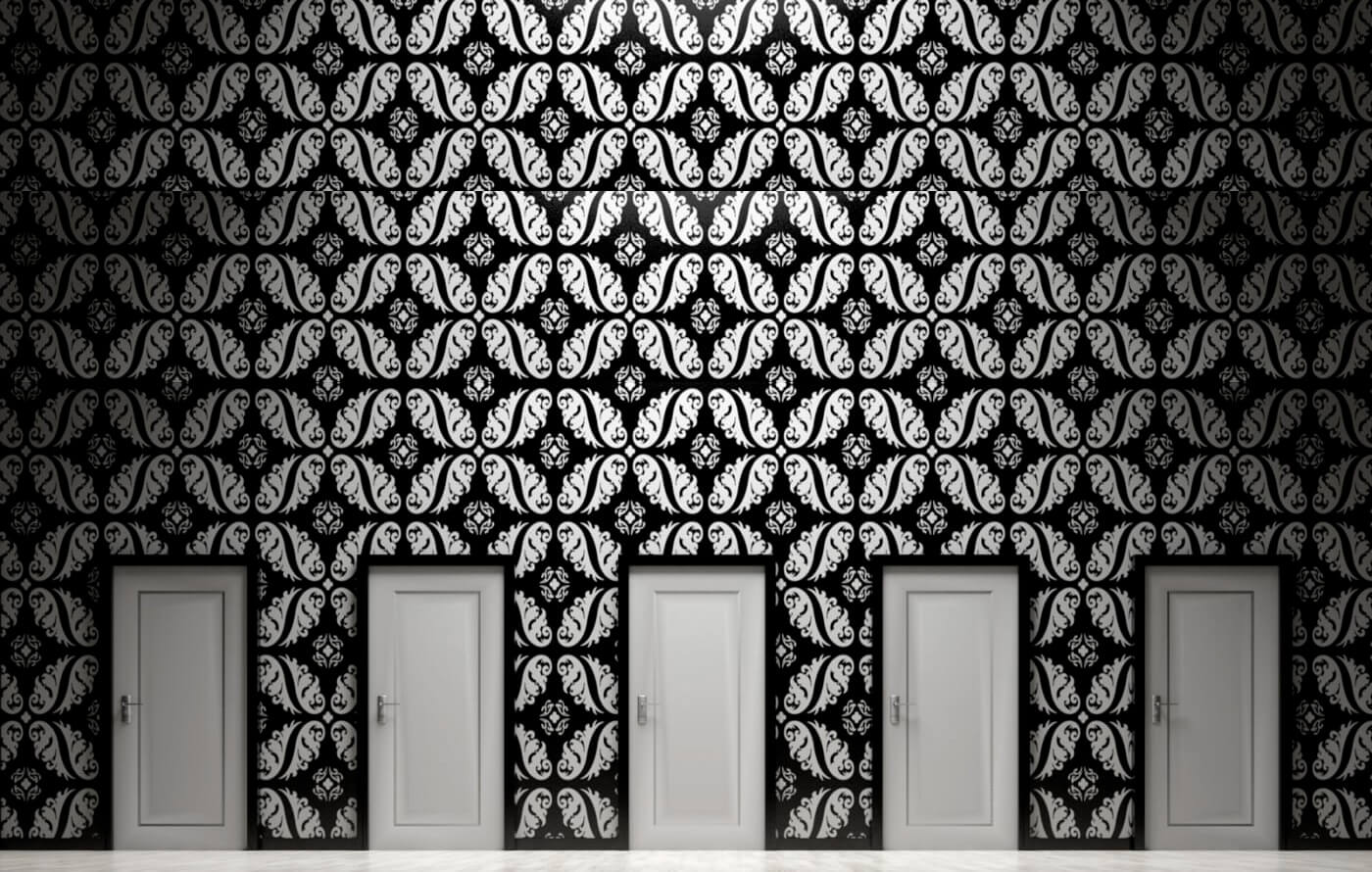 Decision-making is among the most fascinating, complex and essential human behaviors that neuroscientists are only beginning to decipher.

People make countless numbers of decisions every single day, from what to wear to what to eat or where to go. Our brains usually run on autopilot when we make decisions, despite fooling us into believing that we know exactly what we are doing.

However, our decisions are more often swayed by emotions, social bias and social influences than we may like to believe. Experts even claim that 90% of all purchasing decisions are not made consciously, but subconsciously.

In this article, we explore 5 interesting studies that shine a light on surprising ways how people’s decisions are influenced and what this means for their purchase decisions.

1. Emotions Are Necessary for Decision-Making 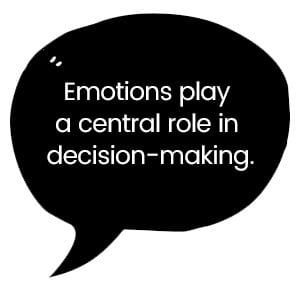 Antonio Damasio, one of the most influential neuroscientists, is a leader in understanding the biological origin of consciousness. He studied one of his patients, a previously successful businessman, who underwent neurosurgery and had part of his brain removed. While his patient recovered from the surgery, he could no longer generate emotions. Damasio discovered that his patient’s IQ remained unchanged and that he could process information, but was incapable of making even basic decisions.

His finding provides evidence that our decisions aren’t based solely on logic. Instead, emotions work subconsciously to guide us. We simply need emotion to make decisions.

Damasio later developed the somatic marker hypothesis, which describes how our most primitive emotions (located in the amygdala) are closely linked to the brain regions that are responsible for decision-making (orbitofrontal cortex).

People choose brands and products that evoke their emotions. Offering a product or service which triggers a customer’s positive emotions is a great way to be remembered as a favorite choice. In his book The Advertised Mind, Erik du Plessis devised a model called the COMMAP, which identifies six areas that can affect likability of ads and marketing. The first three elements, entertainment, empathy, and relevant news, are most important in generating positive emotions. 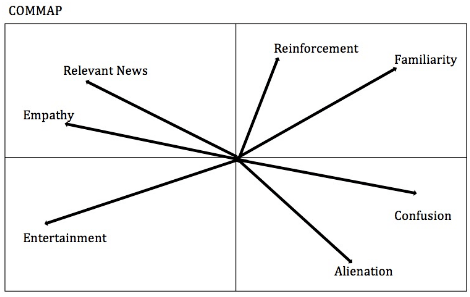 Need-oriented, interactive product advisors can increase the likability of a brand by evoking positive emotions through the combination of the elements 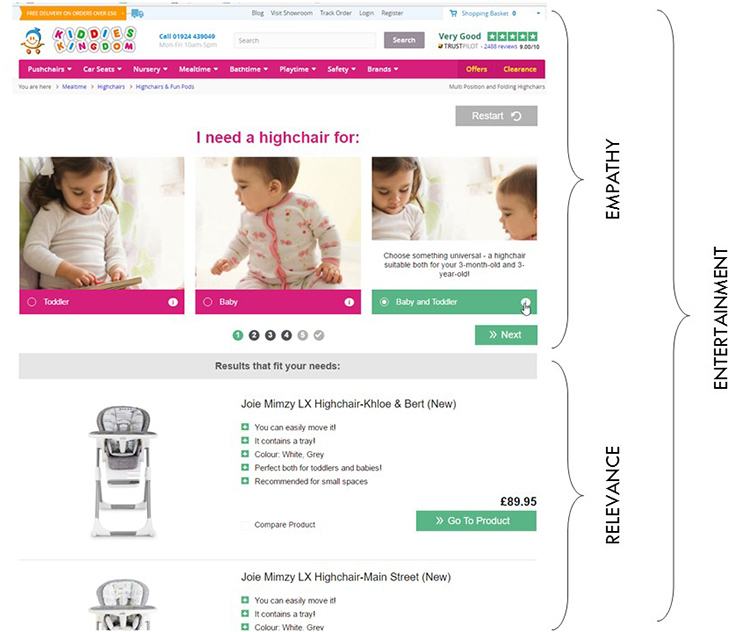 You can also activate emotions by simply changing rational words to emotional words in your narrative and language. 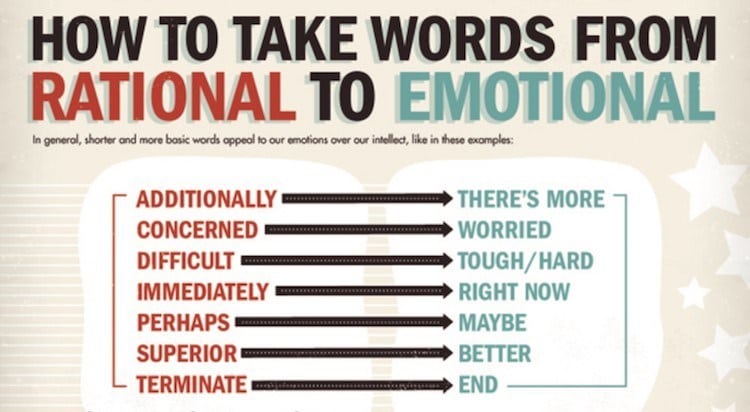 2. Too Much Time Decreases Decision Confidence 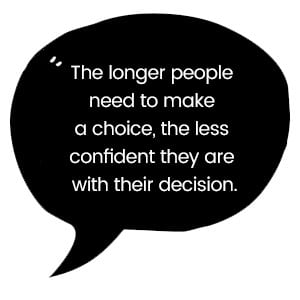 Rather than feeling more confident in a choice after having time to mull it over, a team of neuroscientists found that people will feel less confident with their choices if it takes them much time to make each decision.

To prove this, Dr. Roozbeh Kiani, assistant professor in NYU’s Center for Neural Science, and his team devised an experiment in which participants were asked to decide whether dots within a display would move up or down. Participants didn’t answer verbally but used their eyes to make their prediction: up or down to indicate the direction and left or right to indicate their confidence. In short, they had to simultaneously express their choice and confidence in that choice. 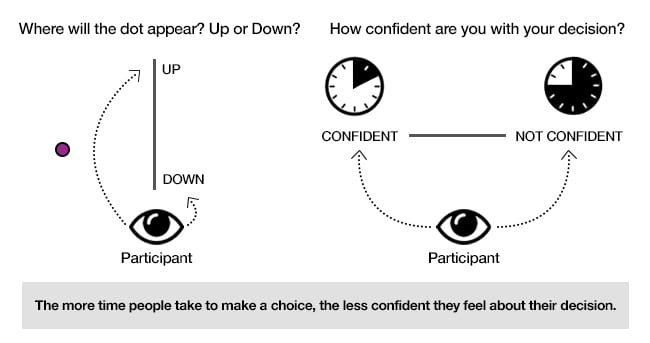 The researchers concluded that taking too much time to make a choice influences our decision confidence negatively. Additional time is only beneficial if it is used to gather the information that justifies and supports the decision.

Consumers are faced with an increasing number of options and information from different sources, which complicates their choices. At the same time, they have limited capacity to use the information and typically rely on simplifying strategies or rules of thumb to help them decide among complex choices (Kahneman et al. 1982; Tversky and Kahneman 1974; Plous 1993).

For choice providers like retailers and brands, it is important to provide tools that simplify consumers’ choices and reduce the time it takes shoppers to make confident decisions. Many companies integrate interactive advice solutions  (Digital assistants and Guided Selling tools) to support decision-making by

3. Too Many Options Turn People Into Hoarders 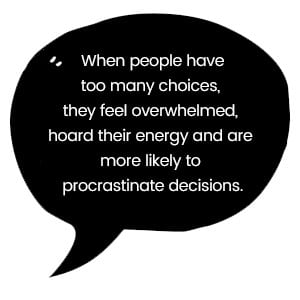 Researchers at the University of Minnesota found that when faced with too many choices, people have a tough time staying focused. It leads to a reduction of “self-control” and “decision fatigue”.

The interesting result is that participants who had to make decisions performed worse on the subsequent math tests that they were given.

It’s evidence that choosing is an exhausting process. When there are too many options to choose from, people are less likely to choose at all.

When shoppers are overwhelmed with too many options and features to choose from, they tend to conserve their energy and make choices based on single factors like the price – “Just give me the cheapest!”

People end up following the conventional path because it’s the easiest way to go. Especially in complex product categories such as medical devices, mobile plans, beauty products or consumer electronics, brands and retailers must help shoppers limit the number of considered options and simplify choosing in a smart way. In other words, let your customers have fewer options to choose from and by that, help them make more satisfying decisions.

4. Decisions Are Controlled By Social Norms 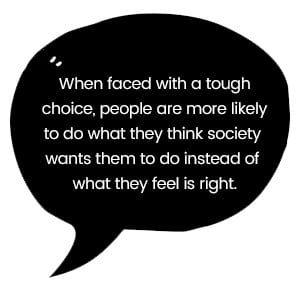 Luke Chang and his colleagues at the University of Colorado Boulder proved this through an economic bargaining game. The study tasks involved a proposer, Player 1, who was in charge of a sum of money that he/she could split with Player 2, the responder. Player 2 could then decide whether to accept or reject the offer. In case the offer was rejected, neither player received any money.

While the general assumption of fairness suggests that the money would be split evenly in most cases, the result was surprising: Player 1s typically offered 30-50% of their endowment and Player 2s tended to accept offers as low as 20% and up.

But why is that?

The explanation for this is that in these social dilemmas, people make decisions based on what they believe most others would do. Responders who already expected proposers to make lower offers were more likely to accept these offers and reject offers that violated their expectations. 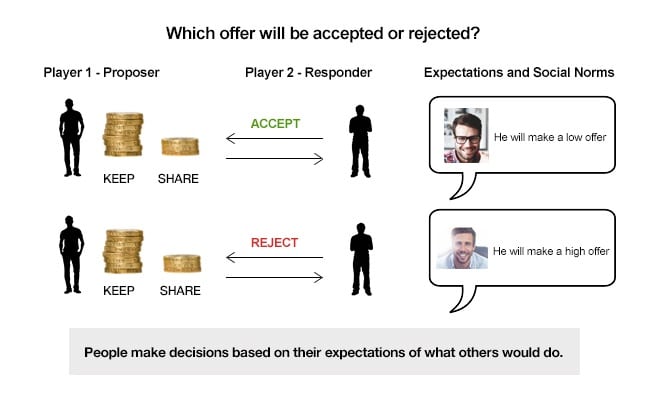 Social norms are major drivers of human behavior and crucial in consumer decision making. Consumers often take expectations of other people’s behavior into consideration when they decide.

Individuals are social beings who are influenced by contextual cues, social preferences, social networks, social identities, and social norms. Consumer decisions are affected not only by their own motivations but also by other users in the consumer’s’ network. People tend to follow others’ choices instead of making their own decisions (good and bad) to reduce cognitive effort when faced with too much online information.

As shoppers become more socially inclined and base their opinions less on advertisements and more on consumer-to-consumer interaction, the role of social media is expected to steadily increase its influence on customer purchasing decisions. Social media recommendations particularly have an effect during initial awareness stages of the decision journey and, according to McKinsey, influenced an average of 26% of purchases across 30 product categories in 2014.

5. We Are Prone to Herd Mentality 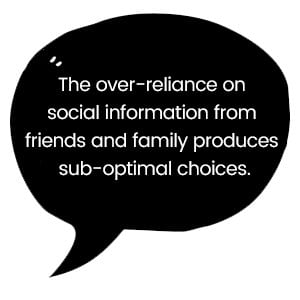 With the rise of fake news, we’ve seen how damaging the over-reliance on information solely from our social circles can be. However, is there any scientific claim to this phenomenon? Researchers from the University of Exeter believe so. Dr. Colin Torney and his team used several mathematical models to illustrate how group opinion evolves and what the effects are over time.

Dr. Torney suggests that people slowly begin to ignore their own instincts and follow the crowd. The group becomes less responsive to changes and vulnerable to manipulation, to the detriment of the whole group. 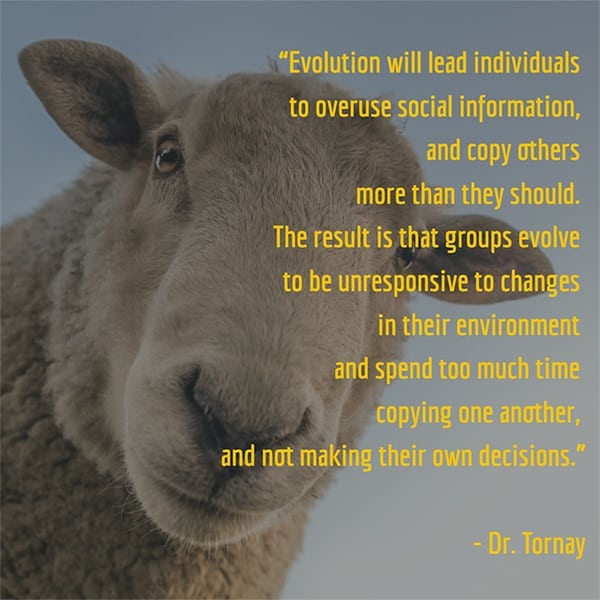 For retailers and brands, this could sound like great news to use to their advantage. You’d only have to influence the 5% within a group that is necessary to influence the direction of an entire crowd and you’d be golden. Right? Not really, because….

According to the study ”Social Defaults: Observed Choices Become Choice Defaults”, people who don’t have a strong opinion about choices tend to simply mimic the people around them. Instead of asking questions or spending time figuring out the best products or solutions for their individual needs, they defer to the social default.

The study also showed that participants who simply copied the people around them made clearly inferior choices that did not benefit them.

If people make choices that turn out to be inferior and bad for them, they will not blame themselves, but your brand and your product. The result is high return rates, eroding loyalty, and decreasing trust.

A study revealed that buyer’s remorse has negative effects on the repeat purchase intention of consumers.

Respondents indicated that when they experience a sense of regret after making a purchase they do not intend to re-purchase the same product again. On the other hand, if their needs have been met or exceeded by a product they have purchased they will resist the activities of other retailers attempting to attract their patronage. Additionally, they will proactively talk about the experience and influence their peers to purchase the very same product.

As a retailer or brand, it is, therefore, necessary to consider yourself as a trusted advisor who is eager to help customers purchase the best possible option according to their individual needs.

Subscribe to get new insights and tips delivered
directly to your inbox. 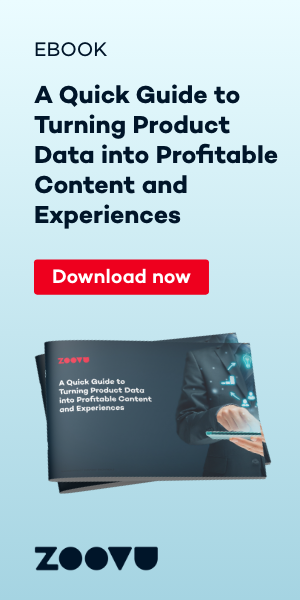 How To Boost Your E-Commerce Holiday Sales with Gift Finders

Why Consumer Electronics Brands Must Make Choosing Easier to Sell